Female Theme Statues for You to Add Value to Your Property

The female form has been a subject of art for centuries now and it has always given humankind breathtaking sculptures and paintings throughout the years. Each figure that has been skillfully carved tells a distinct story and adds to the aesthetics of any space... 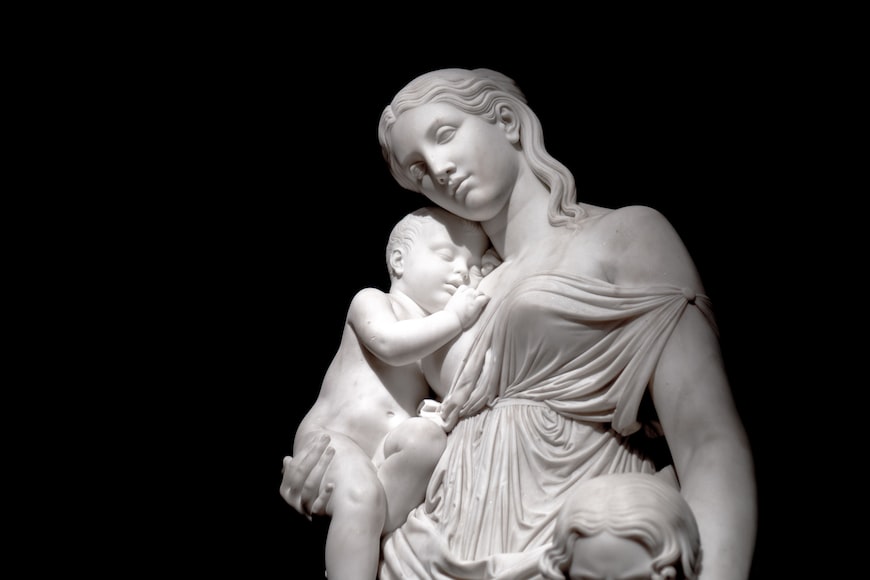 (Check out: Female Theme Statues for You to Add Value to Your Property Hand-carved by New Home Stone)

The female form has been a subject of art for centuries now and it has always given humankind breathtaking sculptures and paintings throughout the years. Each figure that has been skillfully carved tells a distinct story and adds to the aesthetics of any space. What began in ancient Greek culture as a reverence for the goddesses they worshipped, female marble statues have stood the test of time as a major art subject.

While other cultures favored male figures in sculpting, Greek prominently displayed the female body in numerous sculptures throughout their history. From classic elegant forms to modernly coy sculptures, marble female statues depict strength, honor and courage and become a brilliant way to enhance the layout of any design layout. Here we are listing about a dozen of such female theme marble statues that are suitable for any modern or contemporary home or garden. 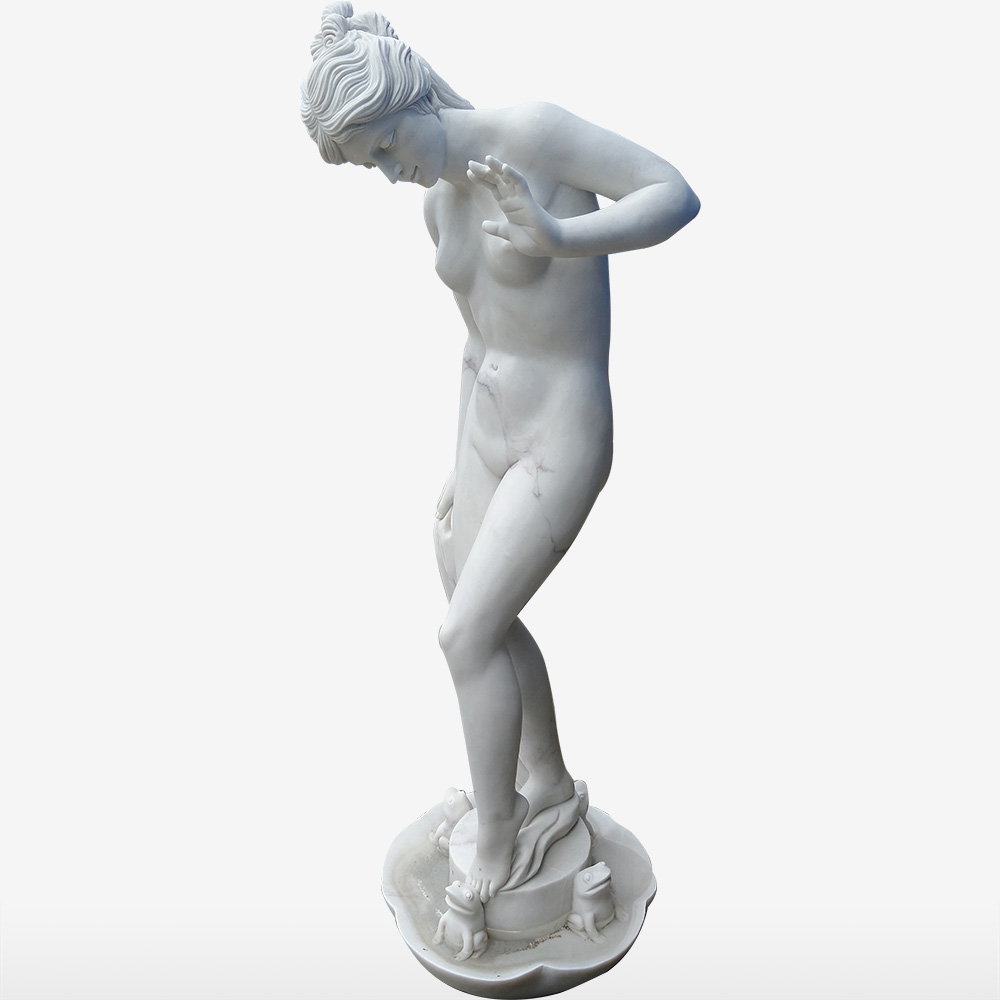 Crafted from natural white marble, this female statue captures the essence of female form beautifully. The statue is standing on a small round base that features four toads on four sides. The entire sculpture is placed in a shell-shaped bowl-like structure. One hand of the female figure is holding a piece of cloth, while the other is held in an upright position on the side of its ribs. Its face has calm expressions as if testing the waters before taking a dip. The hair of the statue are beautifully carved and are half-tied in a bun, while the other is flowing down its back. The marble has gentle gray veining running across the body of the statue. 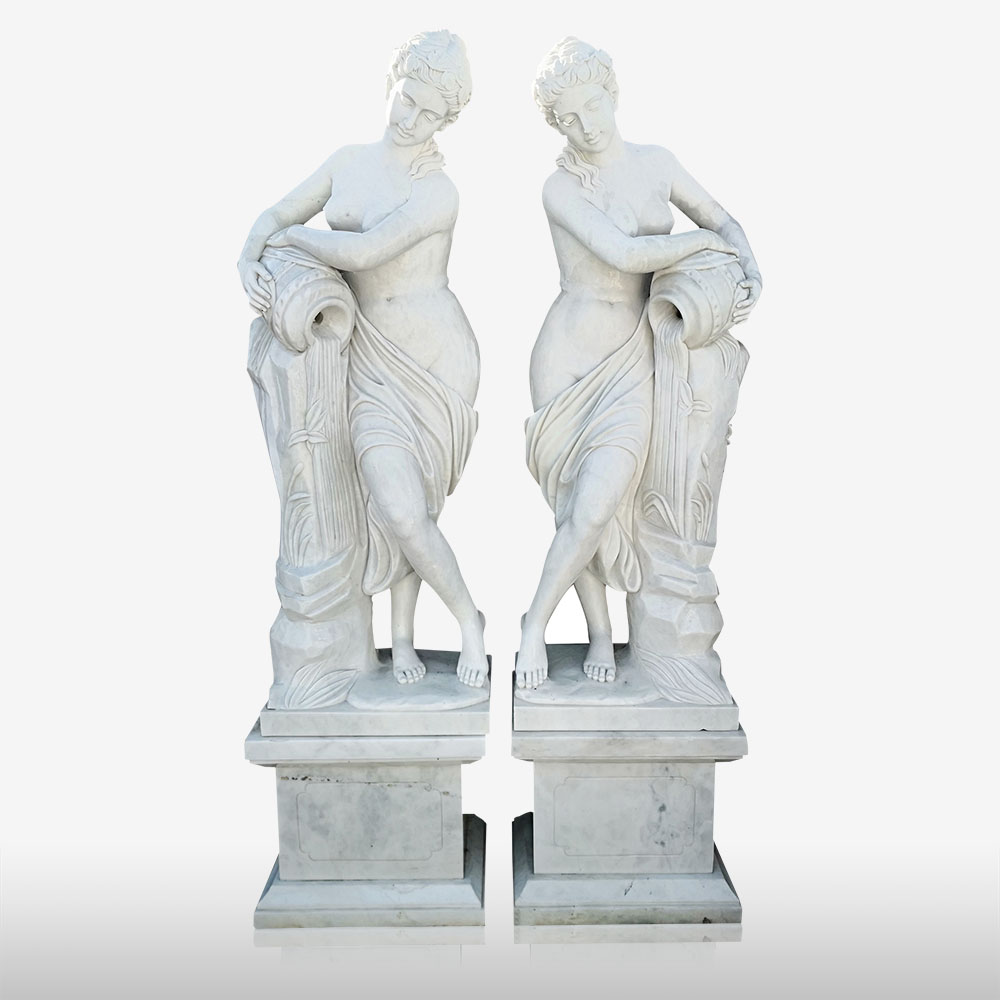 What can be better than one marble female statue – two marble statues! This pair of female marble sculptures features two women who are half-naked and holding tilted pots of fluid on their sides. Both statues are placed on matching square marble pedestals. One corner of each pedestal has a protruding structure, which blends with the fluid flowing from the pots that females are holding. The torso is naked, while the bottom half of the ladies are covered in a loose piece of garment. Both are bearing gentle expressions on their faces and their hair are half-tied. They can be a wonderful addition to any modern space and can be customized as well. 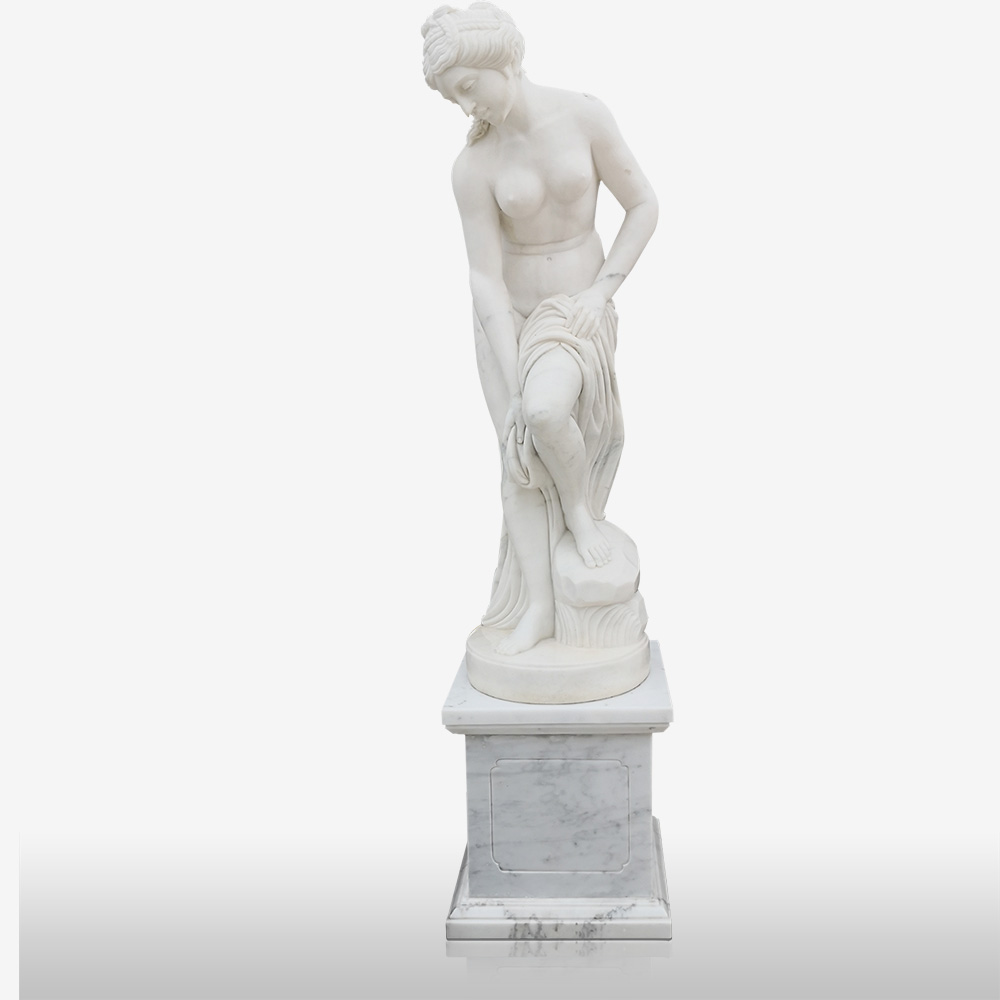 Standing gracefully on a matching marble pedestal and a round base, this half-naked female sculpture has been beautifully carved from natural white marble. The pedestal and statue both have gray veins. One foot of the statue is placed on the bottom round base, while the other is positioned on a roughly carved stone-like base on the bottom round base. The top half of the female is naked, while the woman is bent to dab the bottom half with a piece of clothing. The hair of the statue are half tied and the face bears peaceful expressions. Each aspect of the female form has been gracefully carved and will elegantly elevate the décor of any space. 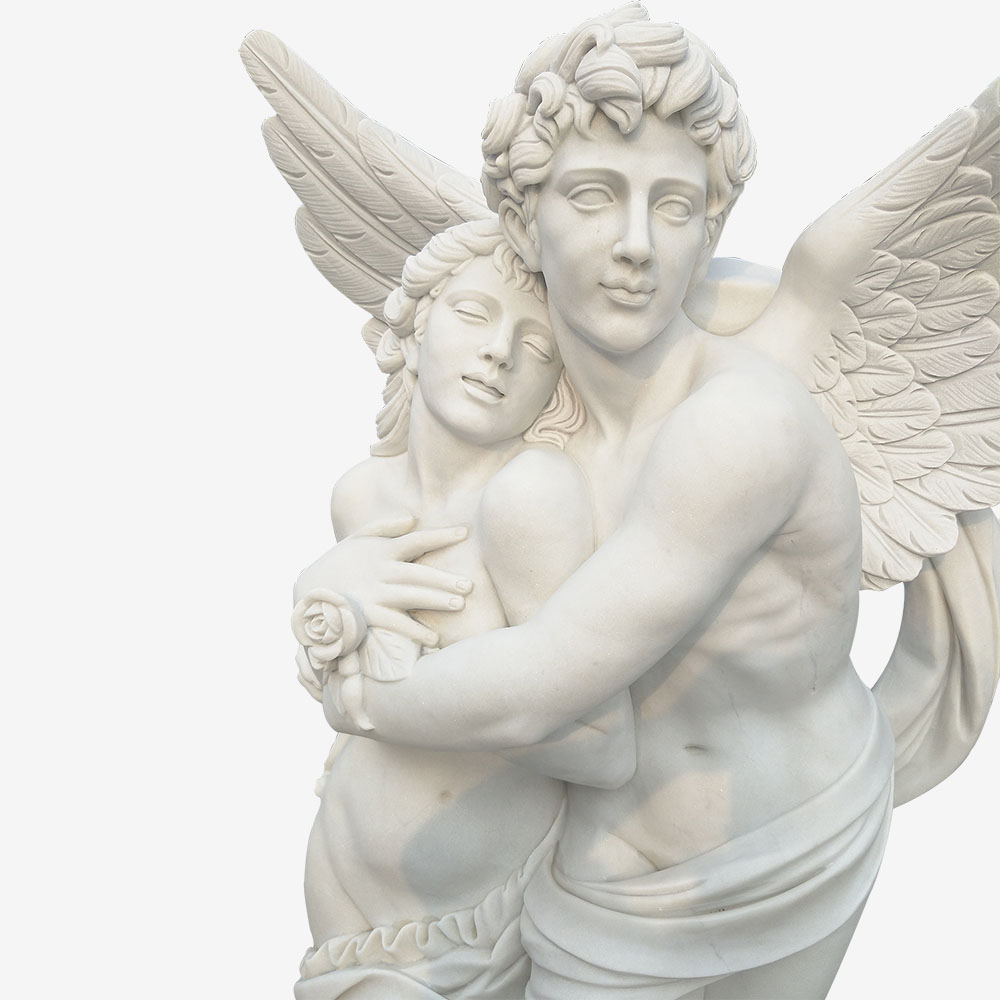 The beauty of male and female figures entwined has been captured in one wonderfully carved white marble statue. The male has wings, indicating he is an ethereal creature and is in love with a mortal woman, who seems to be equally in love with the winged man. The top halves of both figures are naked and in a gentle embrace, while the bottom halves are draped in two different pieces of cloth. The man has his arms wrapped around the woman, who is holding a rose in her hand. The woman statue has its eyes closed and has an expression of tranquil bliss, while the man seems to be taking her on a flight. This divine depiction of love can be an amazing addition to any modern home or garden. 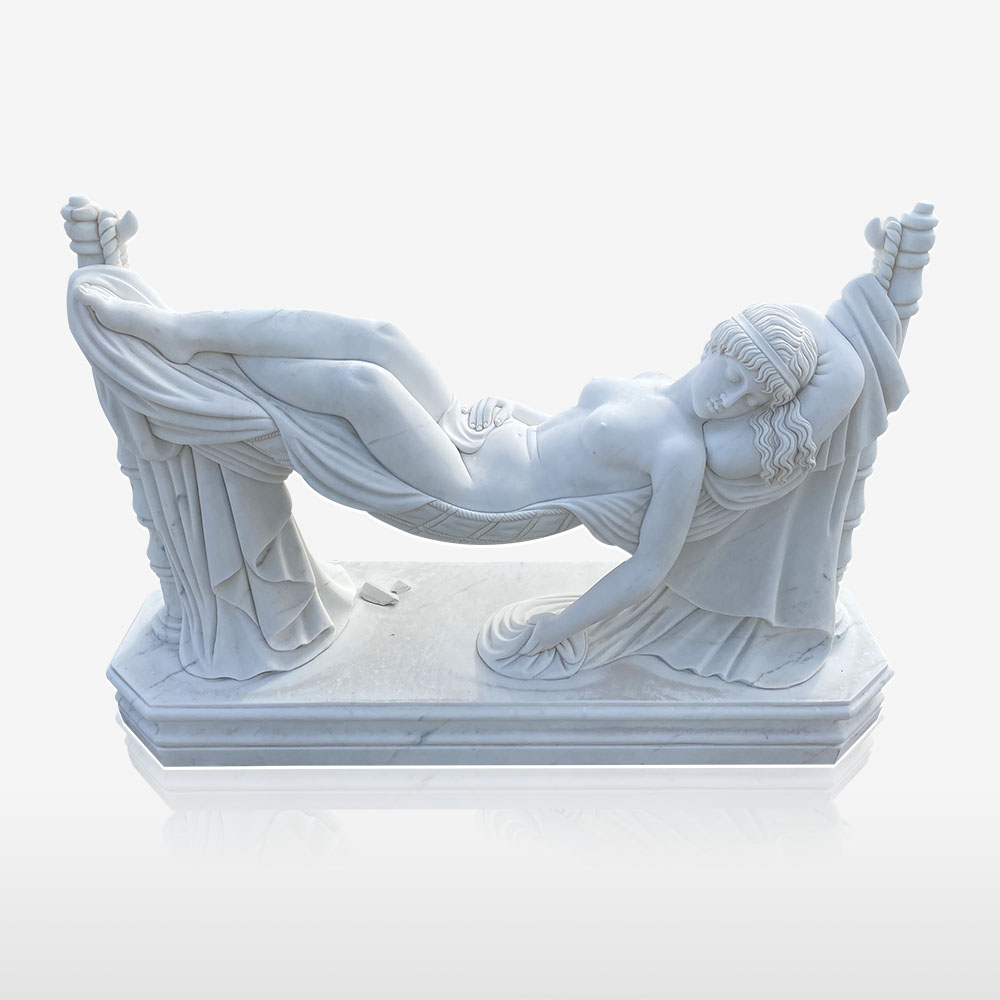 (Check out: Resting Female on a Hammock Marble Statue)

Strategically carved from natural white marble, this female figure resting on a hammock marble statue is simply a breathtaking sight. The naked woman figure is gracefully sprawled on a hammock hanging low from two marble pillars. The entire marble piece is placed on an octagonal marble base with subtle gray veining all across. The curves, the grace, and the femininity of the woman’s body have been skillfully captured in this statue. The marble brings out an exquisite quality in the entire piece. This marvelous sculpture can be displayed in the living room, the garden, or even on the patio. It will not only become a décor element, but add value to your home as well. 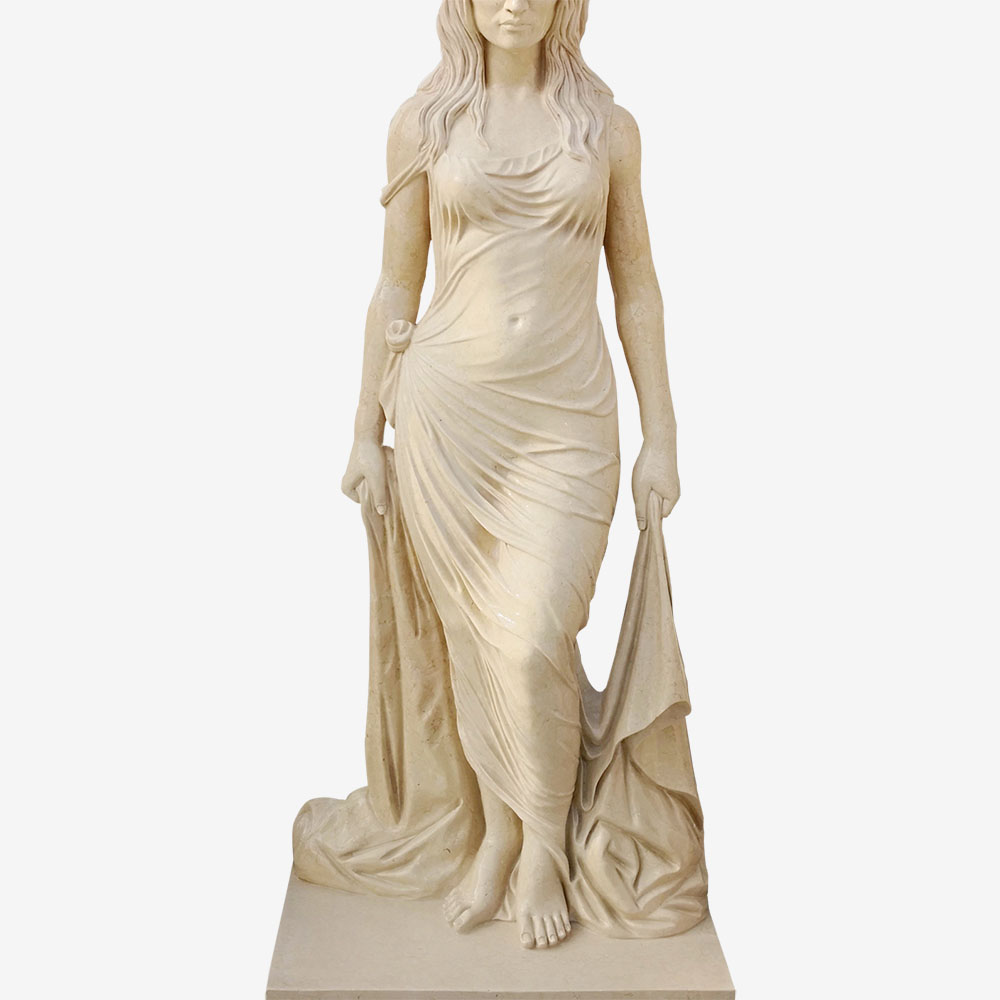 No idea what it is, but there is something irresistible about a lady draped in wet clothes. Made from natural beige marble, this statue of a wet lady is absolutely beautiful and features a female figure enveloped in a long, wet piece of garment. The statue is placed on a matching marble slab and can be placed anywhere in your home as per your preference. The hair of the statue are wet and untied, falling over the shoulder of the figure. The female figure is holding a piece of cloth behind her. The creases of the cloth are carved so delicately and brilliantly that they will seem real to you. The statue will make a valuable investment in your property and can last decades with little maintenance. 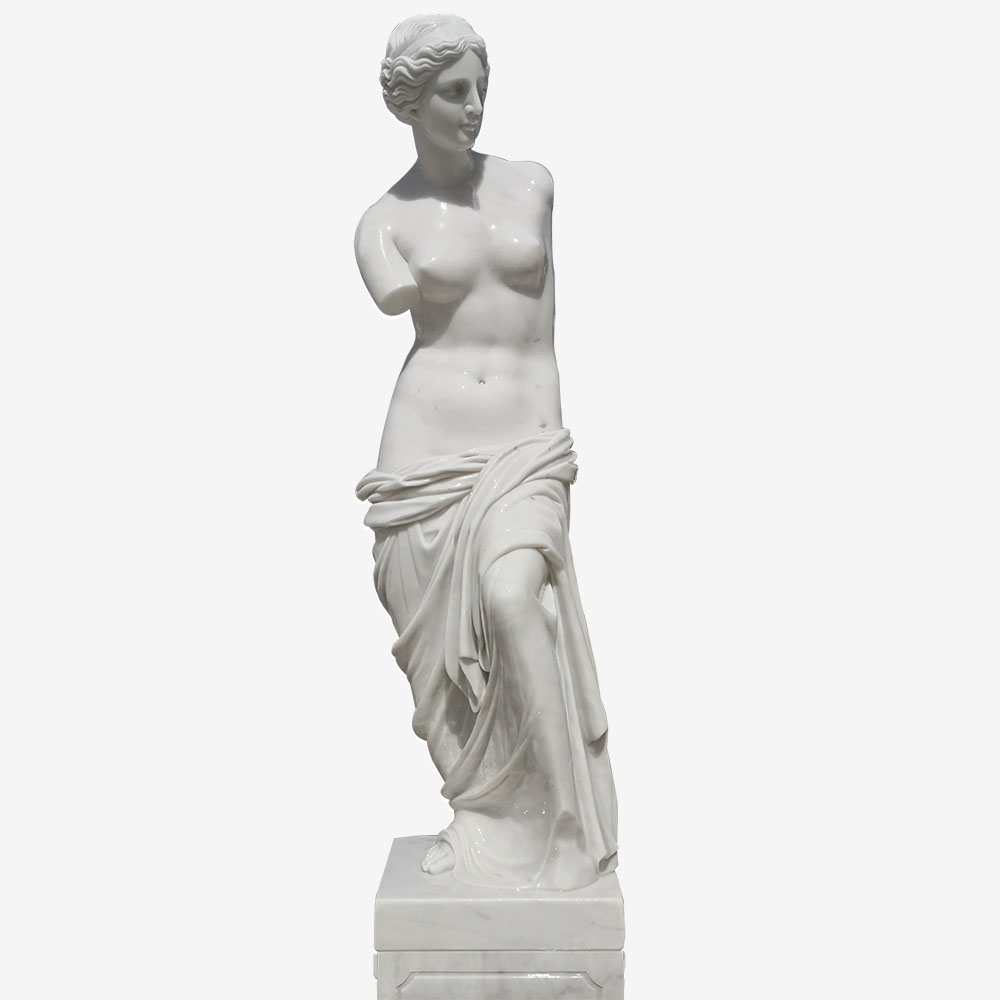 A deformed, dismembered statue in ancient sculptural techniques has been hailed as the utmost form of beauty. This Greek-style inspired white marble woman statue features a half-naked female form with both arms missing. The statue stands tall and proud on a matching white pedestal with gray veining. The bottom half of the figure is covered in a piece of clothing, while the torso is bare with curves skillfully carved. The hair are neatly tied in a bun, and the face bears calm expressions. You can place this statue in any modern or contemporary home or garden to elevate the design layout. 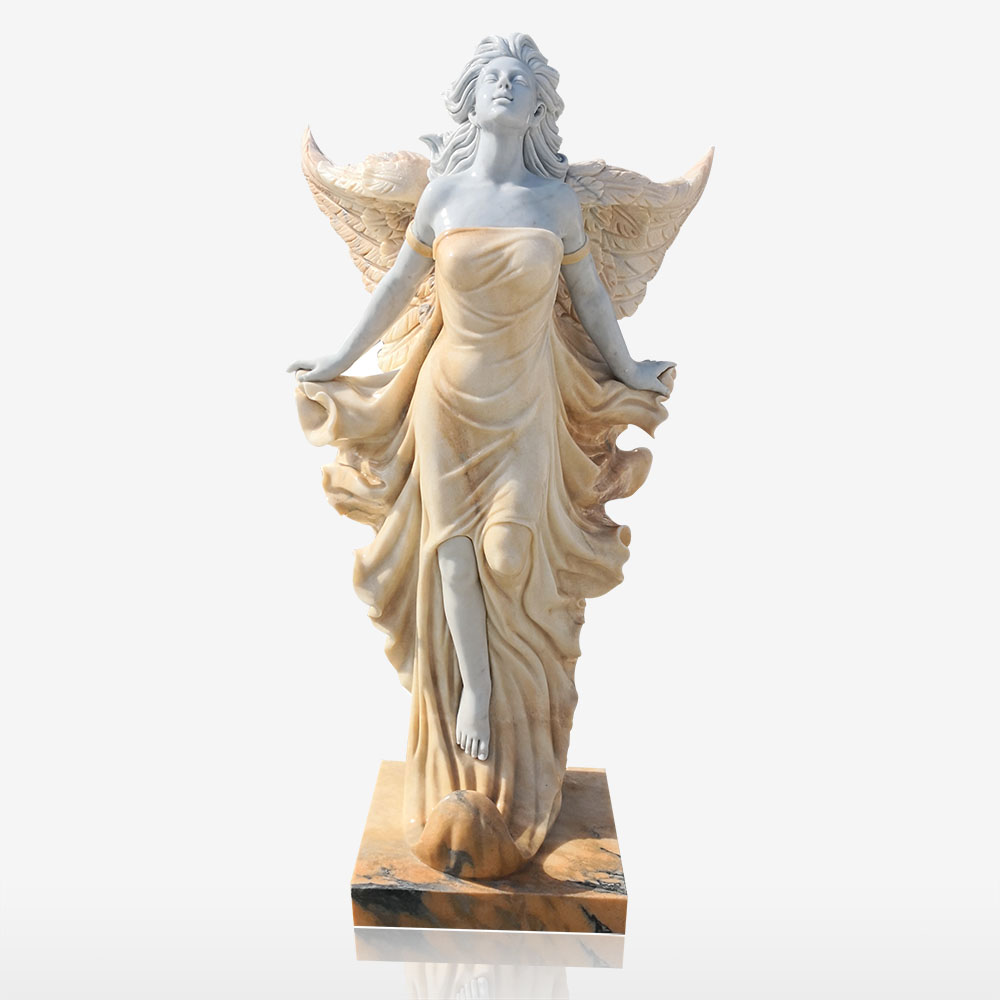 Carved beautifully from beige and white natural marble, this stunning statue of an angel is a sight to behold. This statue will bring a calming and welcoming quality to your layout. It will not only become a décor element but a valuable investment in your property as well. The female angel statue is placed on a beige marble slab with black veining. The attire and wings of the angel are made from beige marble that has subtle veins. The exposed body parts such as the leg, face and arms of the angel are made from white marble. The contrasting colors bring out exquisite aesthetics and the statue is suitable for all modern homes. 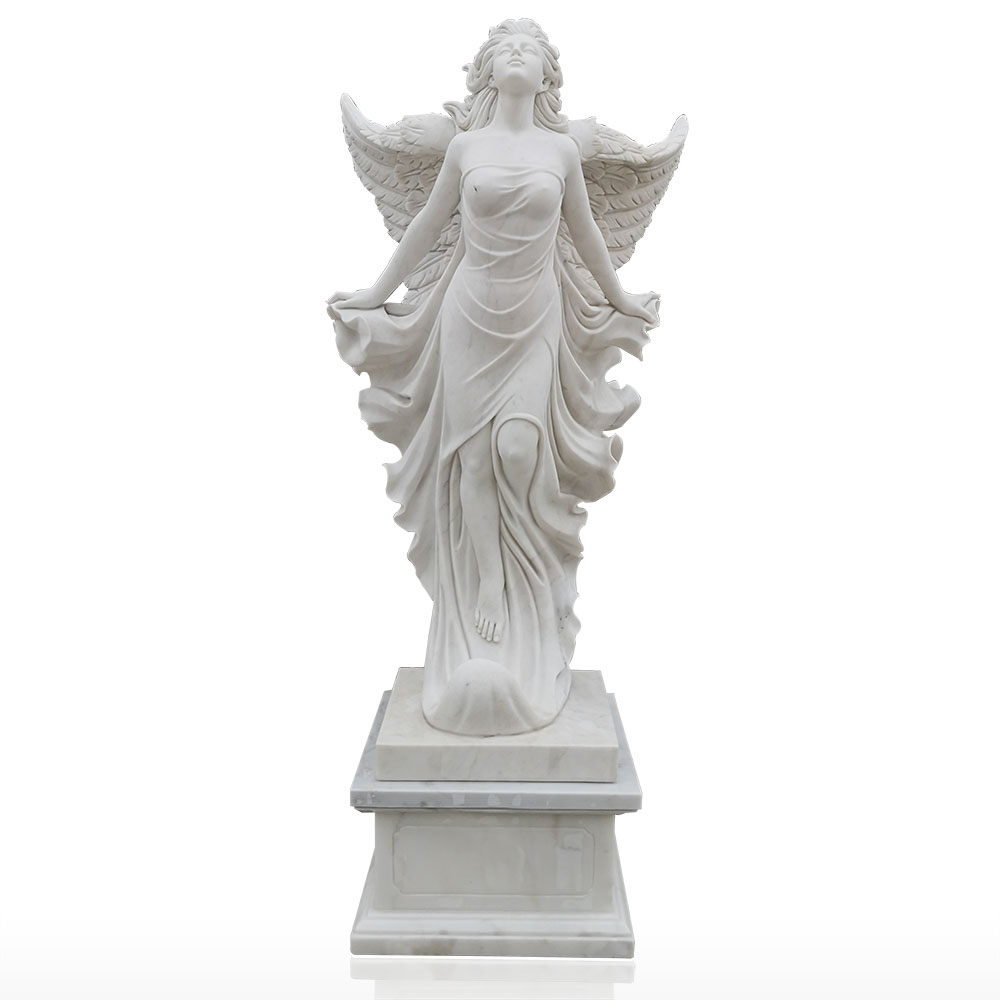 This white marble female angel statue has been brilliantly carved from natural stone that bestows strength and durability to it that only marble can offer. The wings, the female figure and the drapery, all are crafted by skilled sculptors to offer you an absolutely gorgeous piece of art that you can display in your living room, patio or the garden space. The statue is poised on a matching marble pedestal and slab. The marble will offer a delicate yet strong feature that will enhance your design layout and become a valuable investment. You can have it made to order in any size, shape or material to better fit your requirements. 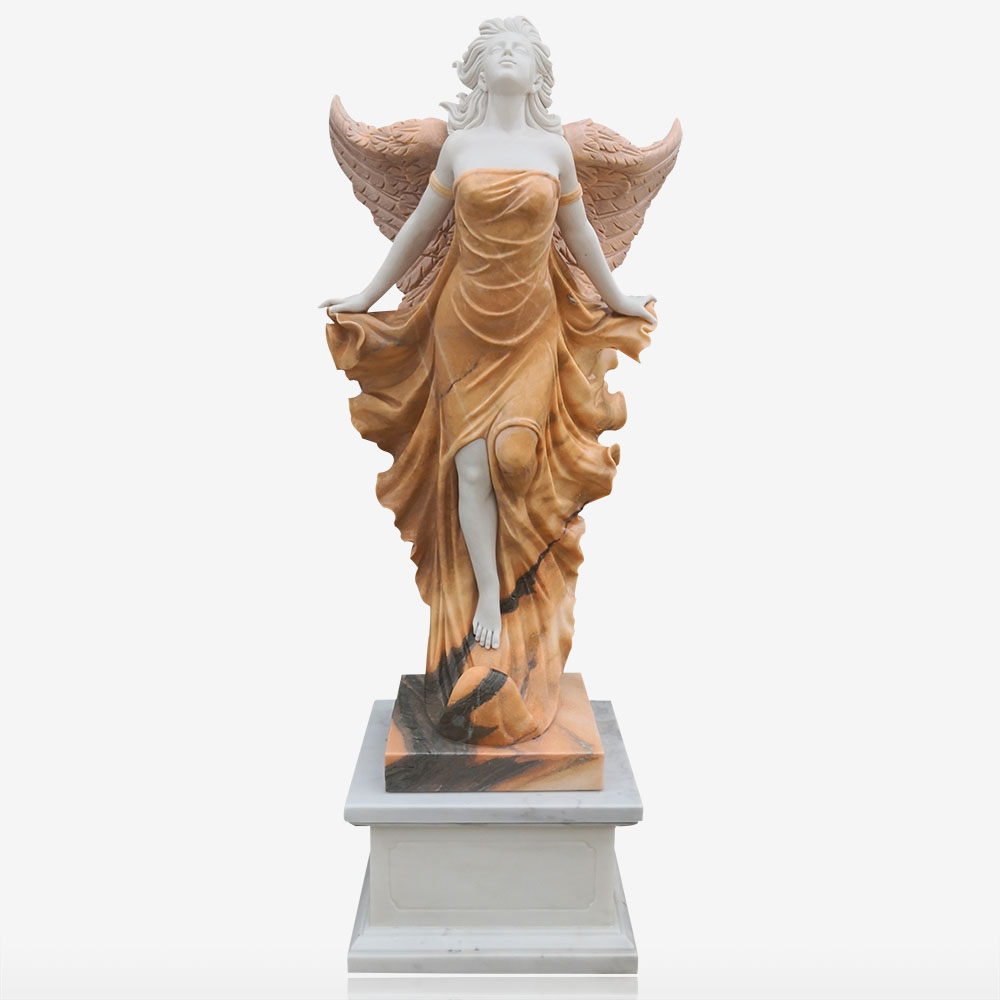 Marvelously crafted from beige and white natural marble, this beautiful statue of an angel is a wonderful addition to any modern or contemporary home or garden. This statue will introduce a gentle and inviting vibe to your home. The female angel statue is placed on a beige marble slab with black veining that is further poised on a white marble pedestal. The dress and wings of the angel are made from beige marble that has subtle veins. The leg, face and arms of the angel are made from white marble. The contrasting colors of the statue bring out a lovely style to your living room. It will become a décor element as well as a valuable investment in your property. 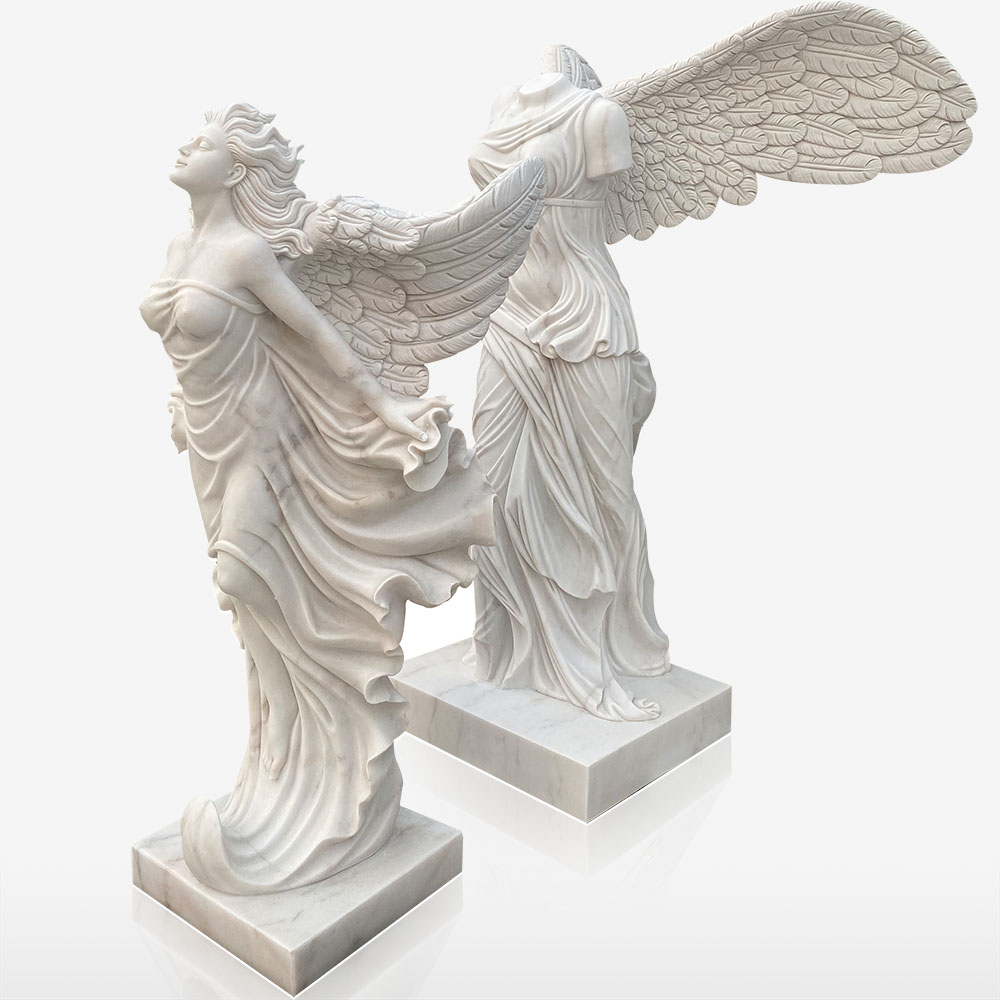 This pair of marble statues features an angel and a fallen angel figure that can be an amazing addition to your statuary. Not only it will elevate your décor, but will also increase the value of your overall property. The statues are placed on matching white marble slabs. One statue is of a female angel with flowing hair and dress, and sprawled wings. The other statue is a deformed angel, with head and arms missing. These statues are simply marvelous and have been crafted by skilled craftsmen. The pair is a perfect pick for any modern, mid-century modern or contemporary home or garden. You can place it inside your home or in the garden. 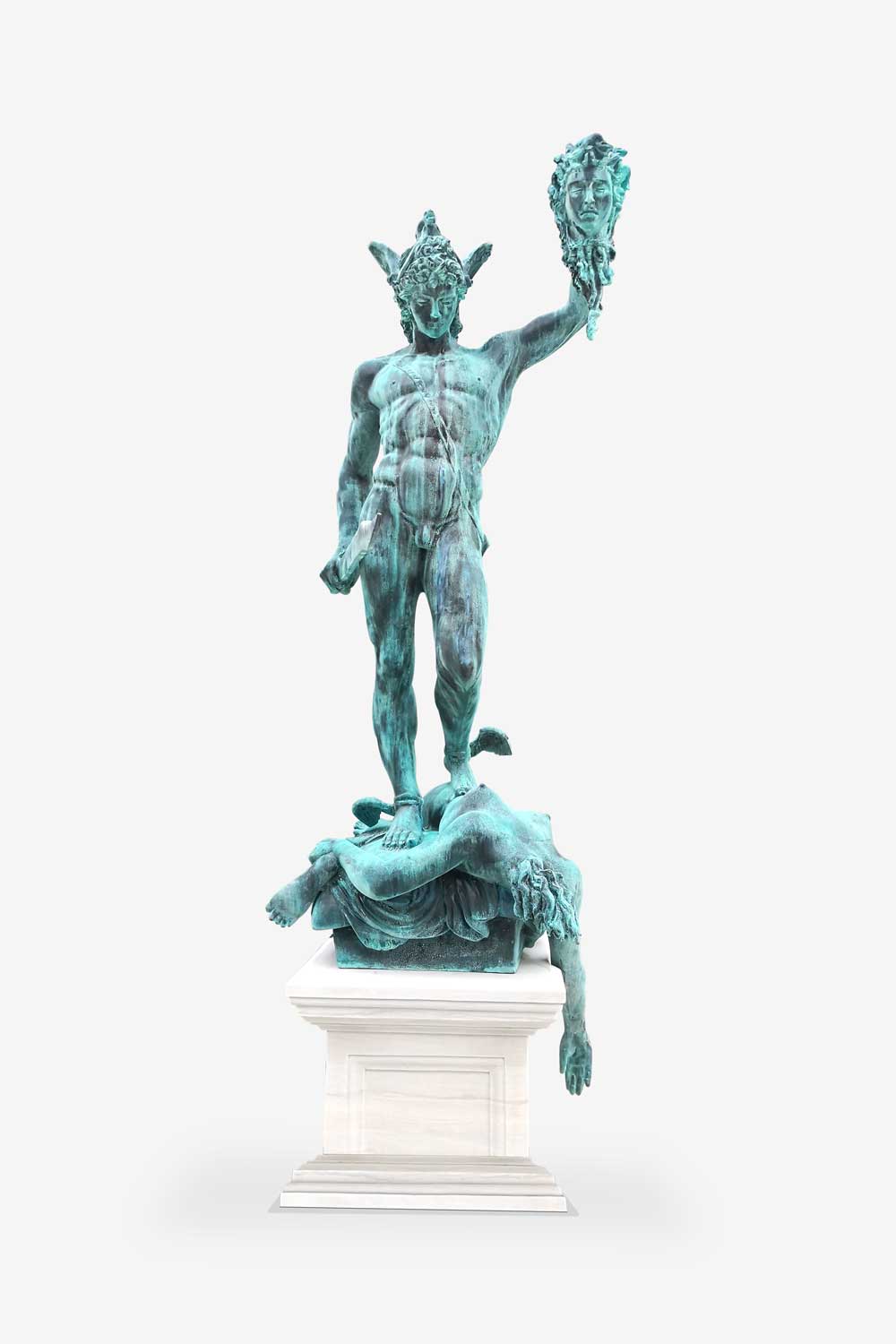 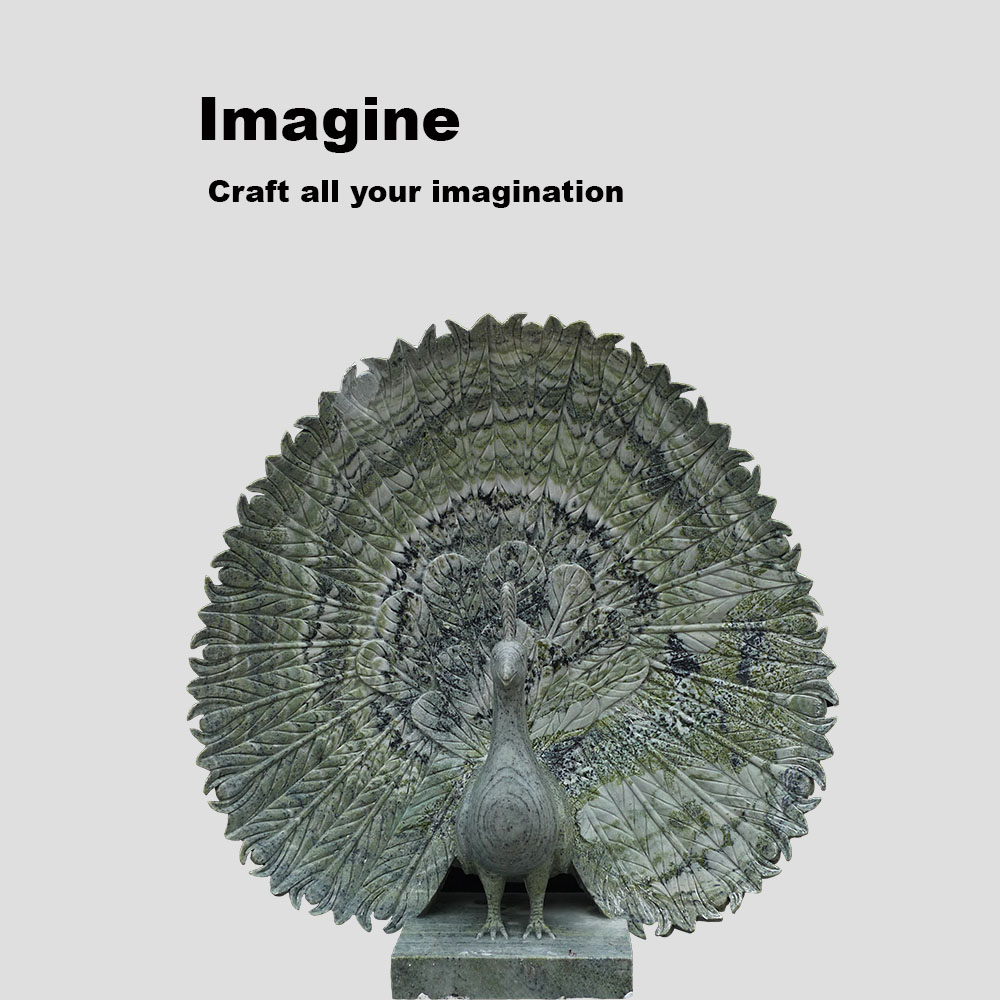 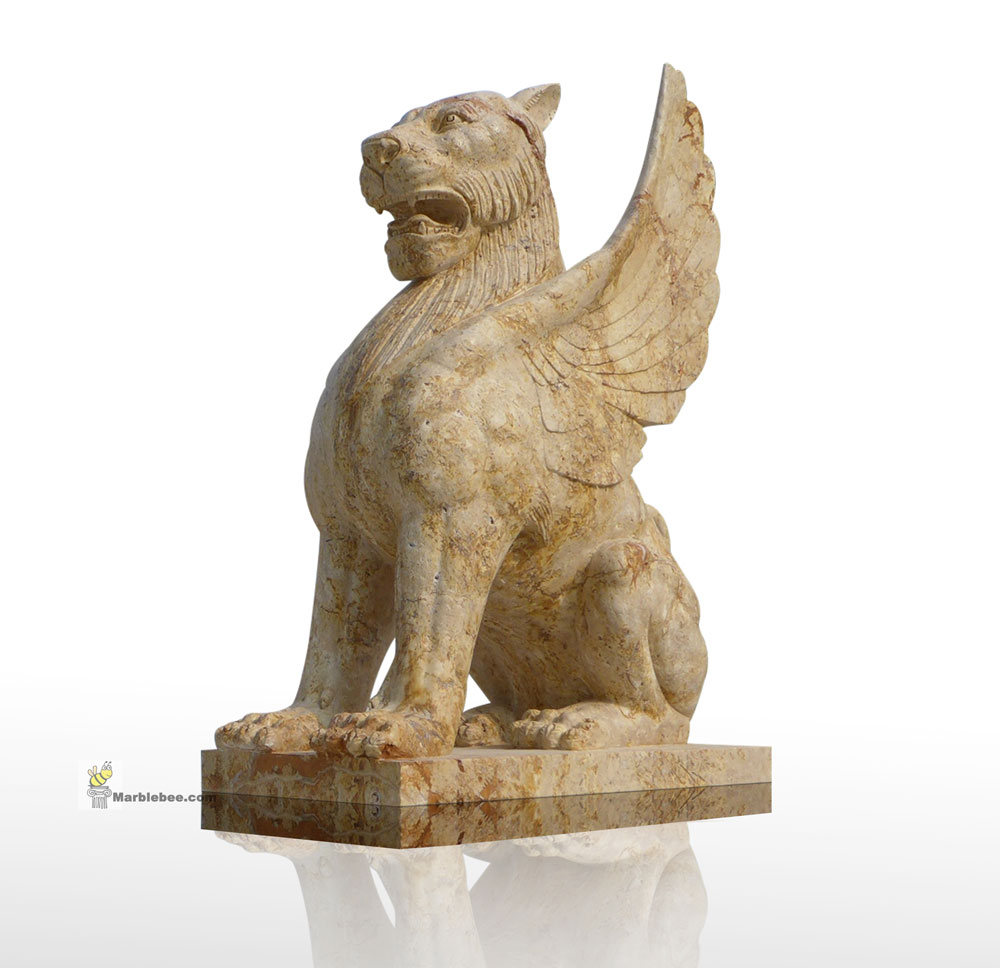 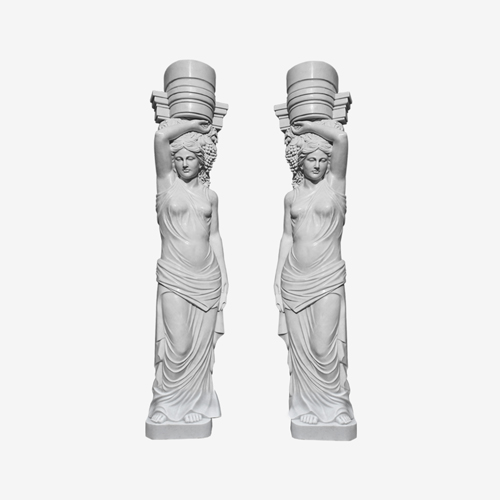 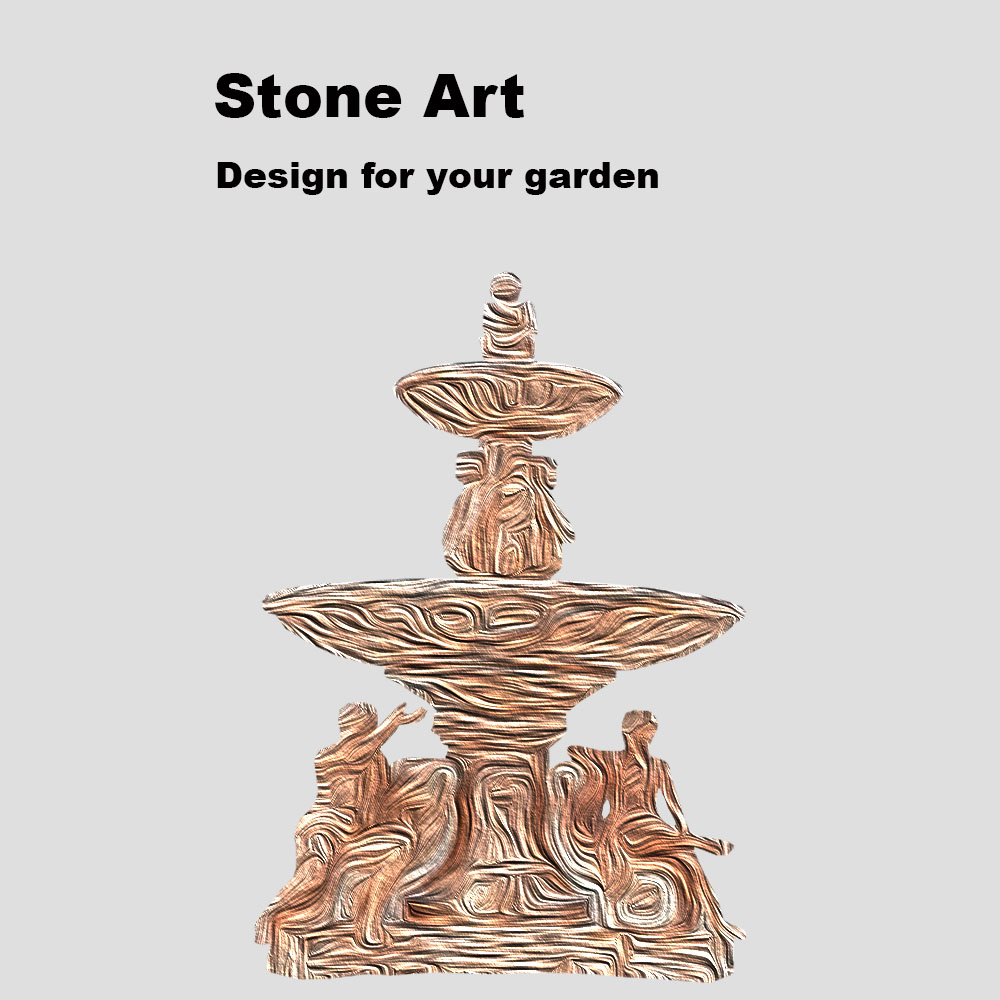 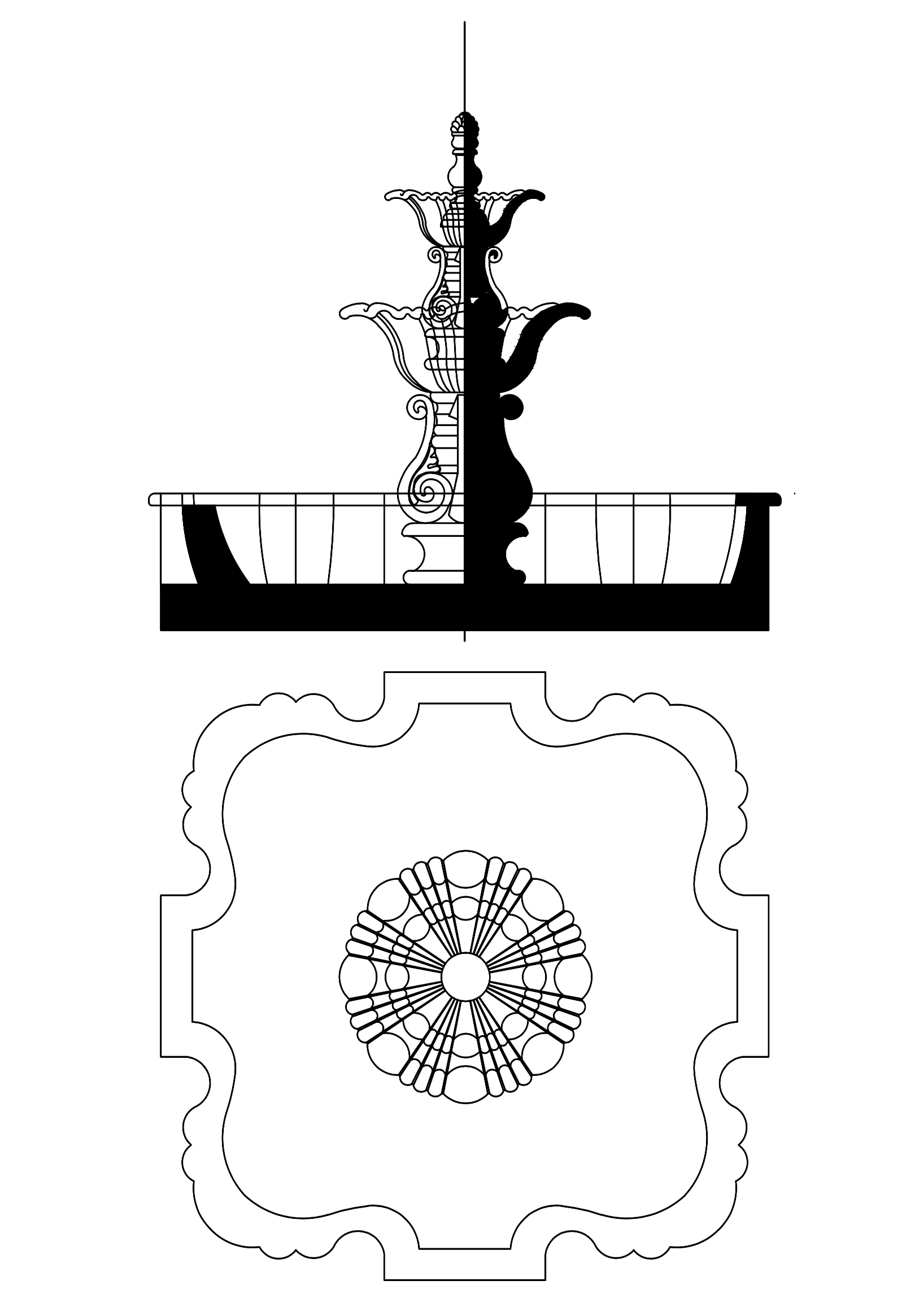